So being one of the first people in Queensland, Australia to get an iPad2 made me feel kind of special.. Now that being said, I’ve used them before, everyone at my work has them and so I wasn’t wowed with the normal ‘ooo it’s shiny’ or ‘gee it’s so small and thin’ because, honestly, i’d seen it all before.

What I am impressed about is the speedy performance of the ipad1’s big brother and the sheer beauty of the new retina display.. It’s truly a wonderful device to use and an absolute pleasure to look at..

The main reason I purchased an iPad2 was for Angry Birds, umm I mean keeping track of meetings, notes and todos.. These things seems to fill up most of my working day nowadays. Mainly I wanted the ability to store meeting notes, add todo’s to these notes for things I have to follow up, and have the ability to access them from my PC also – Windows & Linux to be exact.

Evernote is, and will always be, my one and only repository for keeping snippets of my life. It’s ‘put anything anywhere and access from anywhere’ approach to note taking & document storage is wonderful if you have a brain which rarely stores things in any type of order.

Evernote has a beautiful web interface, a great windows app and with Open-GPL’d NeverNote you have a fully working Linux equivalent also.

Sadly I thought Evernote would be great for my meeting notes & todo’s – not so much because the iPad Evernote client doesn’t allow rich notes – meaning you can’t have checkboxes (for todo lists) and any notes written in the web\windows\linux client in richt text are not editable in the iPad app. Rar!

So I splashed out $5.99 for a copy of Awesome Note from Bridworks and haven’t looked back.. The great part is that it will sync with Evernote as well! Best of both worlds – all your notes are still manageable from both apps.. It also manages todo lists with ease (with alarms if necessary). Not only that you can create a note, then convert it to a todo and vice versa which is very handy. 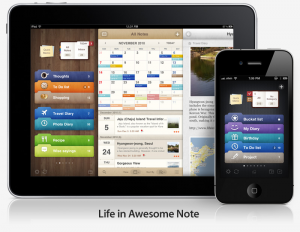 The search features are fantastic and the ability to easily juggle notes around into different ‘notebooks’ or organisational units is a blessing when you have a high volume of notes to store and keep organised.

So if you are looking for an effective way to store Meeting Notes, Todo Lists and other Snippets of information look no further than Evernote & Awesome Note – I think you’ll be very happy.